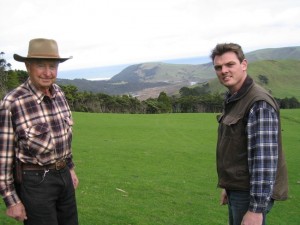 Fifth generation Jonkers on the farm, Greg with his Grandfather & teacher, Artie Jonkers.

Jonkers Farm is a working farm, situated in Auckland, New Zealand.  With 540 acres of beautiful wilderness, they specialise in local and international film production, events and pop up weddings.  They have all necessary vehicles and logistical equipment to make each job a complete success while working on a remote location.

Greg Jonkers, along with his wife, Joanna bought the farm off Greg’s Grandfather, Artie Jonkers in 2001.  The farm has now been in the Jonkers family for nearly 100 years.  It was first purchased by Greg’s great Grandfather, Rupert Jonkers in 1924.  Greg along with his family of five continue to work the farm with traditional farming methods.  The farm has Black Angus Cows, Romney Sheep, Working Dogs, Wild Goats and Wild Turkeys and beautiful native birds.

Locations at Jonkers Farm include:

For ninety years, five generations of the Jonkers family have farmed the land at Puketotara (the original Maori name for the land on which Jonkers Farm now stands) and run it as a working farm.

This spectacular 540 acre property is also a global destination for film and special events.